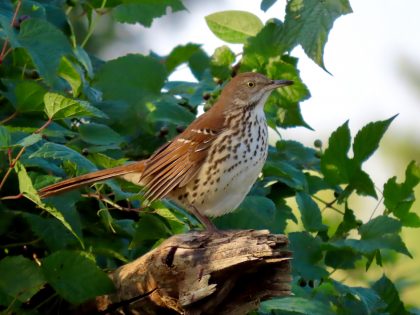 Brown Thrasher is one of the species that could benefit from the Recovering America’s Wildlife Act.

November 16, 2020 — Conservation organizations like Connecticut Audubon are starting to make a final push to persuade the U.S. Senate to pass the Recovering America’s Wildlife Act.

Those of us at Connecticut Audubon have added our name to a letter supporting passage. It’s important to include as many names as possible, so we’re asking you to please consider adding your name as well.

You will then see the letter to the U.S. Senate.

After you read it, you can add your name by filling out the short form.

You’ve helped before in efforts to pass the Recovering America’s Wildlife Act. During an era that has seen North America’s bird population fall by 30%, it’s a game changer for conservation.

RAWA, as it’s known, would provide $1.3 billion a year from the U.S. Treasury to a fund to be distributed to the 50 states to carry out their federally-mandated Wildlife Action Plans.

Most wildlife conservation money now comes from license fees and taxes paid by hunters and anglers. It is spent to protect and increase the number of game animals. The Recovering America’s Wildlife Act would provide money to protect wildlife you can’t hunt, including Connecticut’s birds.

The pieces are in place: the need (30% of birds gone), the blueprints (federally-approved state Wildlife Action plans), and the money ($1.3 billion a year).

The final piece is passage in the Senate. The bill has bi-partisan support and has already passed the House of Representatives. All indications are that if RAWA passes, the President will sign it.

Supporting it now is both easy and effective.

Please click this link to add your name. Thank you!