Join us on Dec. 1 for “125 Years of Bird Conservation Through Local Action” — the official release of the Connecticut State of the Birds 2022 report 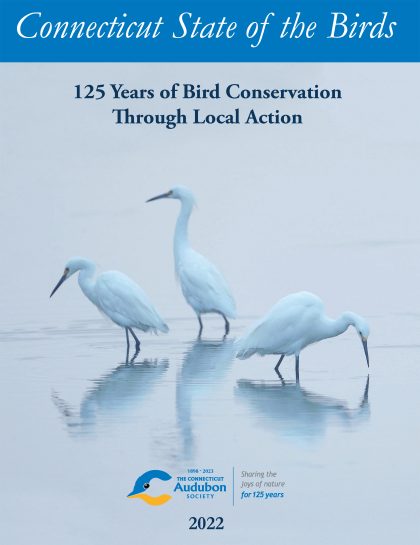 November 27, 2022 — The American environmental movement began to truly gain momentum in the late 19th century as a way to save birds.

“Save” is not too strong a word. Grassroots organizations that are now the foundation of environmental advocacy were formed to stop the slaughter of herons and egrets. Government wetlands protection began as a way to rebuild declining numbers of ducks and geese. Regulators banned the worst pesticides in hopes of preventing Ospreys and Bald Eagles from becoming extinct.

Connecticut was deeply involved in those movements and more. Yet as the Connecticut Audubon Society prepares to celebrate its 125th anniversary, the birds that inspired those gains in environmental conservation face a deeply uncertain future.

The 2022 Connecticut State of the Birds report looks at conservation history in the state and beyond through the stories of five groups of birds:

The report, titled “125 Years of Bird Conservation Through Local Action,” emphasizes their status now and in a future made even more hard-to-predict because of climate change.

Join us on Thursday, December 1, 11 a.m., on Zoom for the official release of the report.

The authors of the report’s articles will join Connecticut Audubon staff to discuss the report and the history and future of conservation.

It’s free but you must RSVP to get the link. Click HERE!