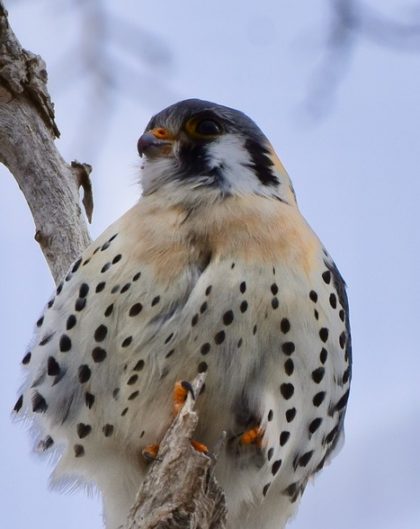 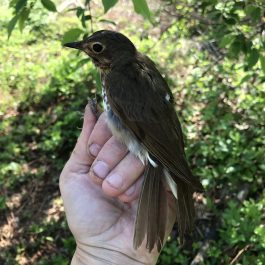 A Swainson’s Thrush captured and fitted with a Motus nanotag by Desiree L. Narango, Ph.D., who took the photo. After it passed Deer Pond Farm, it was next located in Costa Rica.

November 4, 2022 — Some of the most interesting birds recorded at Connecticut Audubon sanctuaries during this year’s fall migration were birds that nobody even saw.

American Kestrels that zig-zagged across southeastern New England before passing the Center at Pomfret.

Swainson’s Thrushes that had stopped in Springfield, Massachusetts, during their spring migration, nested far to the north, and then passed Deer Pond Farm in Sherman on their way south again.

These birds had been fitted with tiny transmitters that let researchers using the Motus Wildlife Tracking System follow the movements of birds across thousands of miles. They were detected by Motus antennas at the Center at Pomfret and Deer Pond Farm.

The antennas can detect birds within a 10-mile radius. For the Deer Pond Farm antenna, which has been operating since 2018, that encompasses places as far as Bridgewater and Brookfield, Connecticut, to the east, for example, and Wingdale and Lake Carmel in New York.

The Pomfret antenna was erected last year. Its detection radius includes a slice of Rhode Island, Natchaug State Forest in Eastford, Connecticut, and parts of Thompson and Brooklyn, Connecticut.

The two antennas have picked up transmissions from 74 birds in all (a third Connecticut Audubon antenna, at Shepaug Dam, has been quieter, with just two records).

One of the beauties of the Motus system is that all the tiny transmitters use the same frequency, so any tag can be detected by any Motus antenna around the world. The Motus maps and data are available to researchers throughout the world.

They are giving ornithologists information about bird migration and other seasonal movements that they’ve never been able to collect before.

Early in November, Connecticut Audubon asked author and researcher Scott Weidensaul for an update on the Motus program and an assessment of what it is accomplishing. Scott is one of four principals of the Northeast Motus Collaborative and has contributed to our Connecticut State of the Birds report.

Here’s what he wrote back:

“The Motus Wildlife Tracking System is exploding in scale internationally, with nearly 1,600 receiver sites operating worldwide, and dozens more coming online every month, with especially exciting growth in Latin America and the Caribbean. Here in New England our group, the Northeast Motus Collaboration, in cooperation with several state agencies and conservation organizations has installed the last of 50 new receivers, which significantly expanded the wider network that Connecticut Audubon’s sites are part of.

“Now comes the important part. Hundreds of researchers are using Motus technology to explore the movements of birds, bats, insects — even (at a very local scale) those of endangered bog turtles. Motus receivers on buoys off the Atlantic coast are helping federal regulators understand the potential impact of offshore wind development on migratory birds. Other scientists have used Motus to figure out, for example, what nocturnal foraging habitats eastern whip-poor-wills prefer, and to recognize the importance of particular coastal wetlands for migrating semipalmated sandpipers — two species that are in steep decline, where this information is of critical importance.”

You can read more from Scott on the topic here.

The Motus maps are fascinating and addicting. Your membership and support are helping to provide the staff time and expertise to maintain and monitor our system, so please have fun perusing the maps.

Here is the list of birds detected at Deer Pond Farm.

Here is the list of birds detected at Pomfret.

On either page, find a bird in the “Species” column and then click the link in the “Tag Deployment” column.

At the bottom of the next page, click on “A Table” or “A Map” for more. 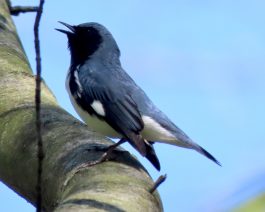 The two Swainson’s Thrushes pinged the Deer Pond Farm antenna on September 14 and 29. They had hatched to the north in 2021 and were mist-netted in Springfield by Desiree Narango, Ph.D., a University of Massachusetts Amherst ecologist who is studying how well urban forests support stopover habitat and the role of diet in refueling.

Dr. Narango, who is an expert in native plants and their importance for birds, was part of Connecticut Audubon’s Young, Gifted and Wild About Birds series in 2021.

After Deer Pond Farm, its next pings were on October 25, in Caracara and Finca Cristina, Costa Rica.

Motus Screenshot Map of the movements of an American Kestrel 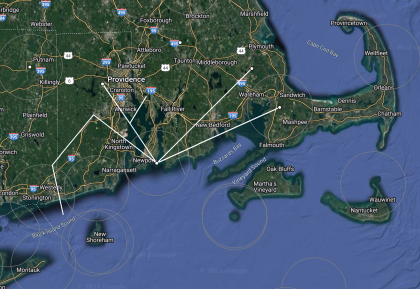 The American Kestrels pinged the Pomfret antenna on September 2, 9 and 29. Each were part of a project overseen by Andrew Vitz, the Massachusetts state ornithologist.

As an example of the kestrels’ movements, the bird detected in Pomfret on September 2 seems to have spent much of the summer between Newport, Rhode Island, and the base of Cape Cod.

Then on September 2 it began to move. Antennas picked it up passing Pomfret; a landfill between Providence and Scituate, Rhode Island; Shelter Island, New York; and Portland and Burlington, Connecticut.

The next day it was in New Jersey. Then it spent about 10 days, until September 14, in the Poconos, before ending up on the Delmarva Peninsula on September 15.

All the birds detected by Motus antennas in Pomfret and Sherman were tagged as part of projects carried out by other ornithologists and conservation biologists, rather than by Connecticut Audubon, and their research is continuing. For Connecticut Audubon, MOTUS is a chance to help while also learning fascinating details about which birds are migrating through the areas.