January 9, 2023 — Connecticut Audubon is kicking off its 125th anniversary year by announcing the acquisition of the Stratford Point preserve, a 28-acre coastal habitat in the heart of one of the state’s most important environmental regions.

Stratford Point sits on a peninsula in Stratford, jutting into Long Island Sound and the mouth of the Housatonic River estuary. It features coastal grasslands and shrubs, salt marsh, a north-facing beach, and a coastal trail with panoramic views of the water.

Relatively isolated between the water and the adjacent neighborhood, it attracts migratory songbirds by the score and supports a growing Purple Martin colony. More than 30 species of waterfowl have been seen resting and feeding on nearby waters. 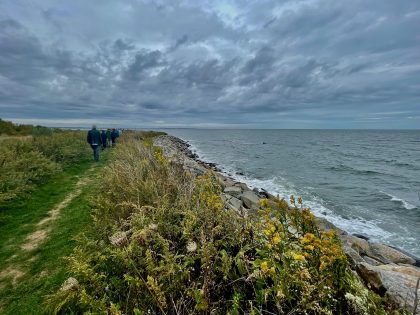 Its location, varied habitats, and commanding viewpoint have given birders the opportunity to see 300 species, as recorded on eBird, including rarities such as White-tailed Kite, Long-tailed Jaeger, Cory’s Shearwater, and Snowy Owl.

With the acquisition, Connecticut Audubon now stewards 22 sanctuaries around the state for conservation and public enjoyment.

The new preserve is less than 2 miles across the mouth of the Housatonic from Connecticut Audubon’s Milford Point Coastal Center. It is also near the population centers of Fairfield and New Haven counties.

“Connecticut Audubon now has two locations as centerpieces of its conservation and environmental education work in the heart of one of Connecticut’s most ecologically important areas,” Connecticut Audubon Executive Director Patrick Comins said. “Our statewide vision is to conserve the natural world for birds and other wildlife, and to share the joys of nature with all.

“This acquisition is 100 percent in keeping with that vision.”

Stratford Point was the home of the Remington Arms Gun Club, which operated a shooting range there for decades. DuPont acquired Remington Arms in the 1940’s and operated the trap and skeet range until 1986.  A large-scale clean-up of lead shot and target fragments was completed in the early 2000’s. DuPont and Remington Arms became subsidiaries of Corteva Agriscience in 2019. 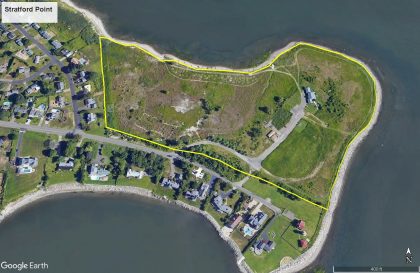 An aerial view of the Stratford Point preserve, outlined in yellow. See the map below for geographical context.

Mike Liberati, the principal project director for Corteva, said, ““Connecticut Audubon Society has been a key partner in the restoration of this important coastal habitat. We are pleased with the property’s transformation, and it’s future use as a conservation and education resource.”

The land is already protected from development by a conservation easement. But by becoming its owner, Connecticut Audubon will be able ensure that its habitats are properly managed for the benefit of the region’s wildlife. Habitat work there will build on the success of ongoing coastal habitat work at the Milford Point Coastal Center and at the H. Smith Richardson Wildlife Sanctuary in Westport.

Tower called the transaction  “a major win for our state’s wildlife and environment.”

Stratford Point sits in an area rich with birds, fish, and other marine life, including vast oyster beds. Nearby are the 699-acre Great Meadows salt marsh in Stratford, part of the Stewart B. McKinney National Wildlife Refuge; the 840-acre Charles B. Wheeler Salt Marsh in Milford, and the Milford Point Coastal Center.

Stratford Point is also the site of important coastal resiliency research being conducted and overseen by Sacred Heart University and the Connecticut Department of Energy and Environmental Protection.

The new preserve is open to the public from 9 a.m. to 4 p.m. Monday through Friday. The sanctuary’s main building will be closed until renovations can be completed.

Connecticut Audubon is grateful to Corteva for the donation, and to Corteva, the CT DEEP and Audubon Connecticut for its stewardship of the property over the years. 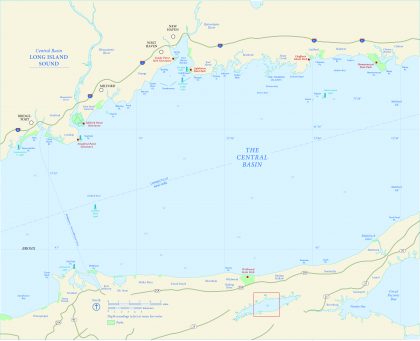