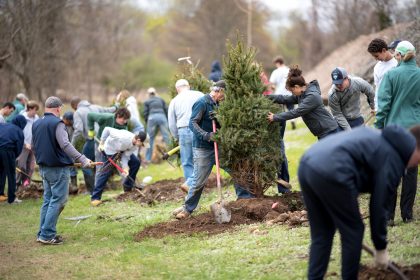 Planting one of the 450 new shrubs and trees at the Smith Richard Preserve. Photo by Scott Kruitbosch

Below, you can find basic information and links to learn more about how birds and other wildlife will benefit from those projects. We’ll be adding more as the days pass.


Smith Richardson
With the help of scores of volunteers and a major grant from the Long Island Sound Futures Fund, the Connecticut Audubon Society is transforming 36 weed-choked acres in Westport into a thriving sanctuary for birds, pollinators, and native plants.

The funding is earmarked for a section of the H. Smith Richardson Wildlife Preserve on Sasco Creek Road. It will allow Connecticut Audubon to plant 1,200 trees and shrubs chosen for their value to birds and other wildlife, and to continue the creation of a two-acre pollinator meadow. Invasive plants and vines that have far less value to birds and insects are being removed.

A description of the sanctuary

August 2018
A paradise for birds and bugs

September 2016
Jerid O’Connell on why Smith Richardson is important

October 2012
Moose at the Croft Preserve