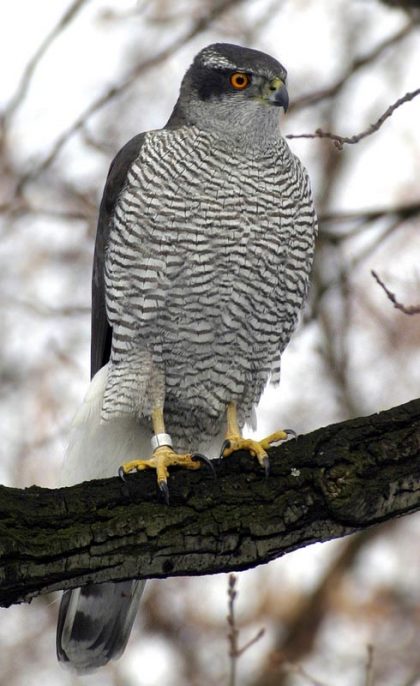 Description and species: One of the largest and least developed sanctuaries owned and managed by Connecticut Audubon Society is the 700 acre Richard G. Croft Memorial Preserve in Goshen, in the rugged northwest hills. This preserve contains a fantastic mix of mature forest, large wetlands, bogs and beaver ponds and is home to an impressive array of wildlife.

Northern Goshawk, Winter Wren, and Hooded Merganser all nest on the preserve. Ruffed Grouse are present in seemingly decent numbers still. Rarities such as Cerulean and Connecticut Warblers have been seen here as well. Because of the large territory available, black bear are common in the preserve and there is a small population of Moose present also.

Connecticut Audubon Society manages about 15% of the preserve as young forest or shrub-scrub habitat, for mammals such as New England cottontail and birds such as Brown Thrasher, Blue-winged Warbler, and Indigo Bunting whose populations are declining in New England.

We work closely with the Natural Resource Conservation Service of the US Department of Agriculture as part of the Federal Wildlife Habitat Incentive Program (WHIP), which provides funding for wildlife habitat improvement projects.

Another important feature of the Croft Preserve is a 17-acre wooded beaver pond that provides breeding habitat for Hooded Mergansers, Wood Ducks and many other species. This large wetland continuously changes shape due to the activity of beavers in the area. Old beaver meadows can be found in various parts of the preserve.

If you are interested in visiting the Croft Preserve, please keep in mind that there is not much of an infrastructure in place. This sanctuary is primarily managed for wildlife and trails are very muddy and steep in places, making them challenging to navigate.