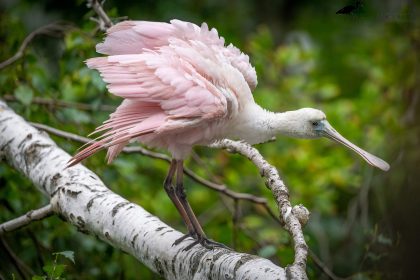 The Roseate Spoonbill spent much of Sunday, September 23, in Stratford, thrilling a gaggle of birders. Photo courtesy of William Canosa.

September 19, 2018 – Connecticut birders are in a tizzy over a Roseate Spoonbill that showed up near the mouth of the Housatonic River this week and was first seen on September 15. It’s the third time this summer that a species new to the state has been seen. This one has been particularly vexatious because it likes to move around, sending birders on the spoonbill version of a wild goose chase. This morning alone birders found it in the marsh at Connecticut Audubon’s Milford Point Coastal Center only to see it fly north and out of sight. For now, anyway.

The same bird was seen and photographed in Wallkill, N.Y., in early August, and in Maine later in August.

Read John Burgeson’s story and interview with our executive director, Patrick Comins, about the spoonbill in today’s Connecticut Post.

Scores of people saw it at the Milford Point Coastal Center or across the Housatonic River in Stratford.

We provided daily updates (when we could get them) of its whereabouts:

Friday, October 5 – Frank Mantlik reports that the Roseate Spoonbill was feeding on the sandbar at high tide this morning, with two Snowy Egrets and two Black Skimmers.

Thursday, October 4 – The Roseate Spoonbill was spotted roosting in a cove on the Stratford side of the Housatonic.

Tuesday, October 2 — The Roseate Spoonbill spent much of yesterday afternoon roosting with Snowy Egrets in a tree near the Stratford Marina. Observers then located it this morning at our Milford Point Coastal Center.

Monday, October 1 – After a weekend in which it spent hours feeding on the sandbar at the Milford Point Coastal Center, the Roseate Spoonbill was located this morning on a piling at the Stratford Marina.

Our communications director, Tom Andersen, wrote about his attempt to find the bird. Click here.

One of our Bird Finder correspondents, Genevieve Nuttall, saw it in Stratford and wrote this account.

by Genevieve Nuttall
Like many Connecticut birders, I thought it was lucky to see one state record bird species this summer. I got a great look at the Black-bellied Whistling Duck in Essex. I never made it out to see the Little Egret in Stonington, but I was content with at least seeing the one new species for the state. 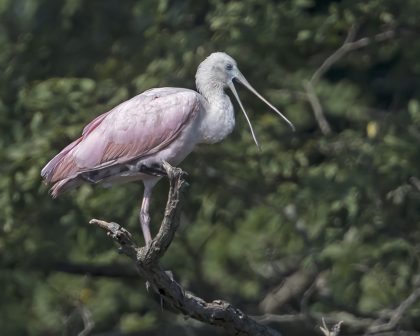 This photo is courtesy of A.J. Hand.

When I learned about the Roseate Spoonbill in Stratford late afternoon on Monday, I was excited and happy to have the chance to see another first state record.

I left my office at Stratford Point for a quick drive north to Brookside Drive where the bird had been reported. I did not have the exact location for the sighting, but I figured there would be a large group of birders as a landmark.

I found them huddled, overlooking a marsh from Brookside Drive. We took turns searching for the bird, with the taller folks in back and the shorter folks like me in front. It had just flown into the marsh as I pulled in, so we had to wait a few minutes for it to pop up, fly a short distance, and tuck back into the marsh. It repeated this behavior a couple of times, only wanting to show itself for a moment before hiding in the grasses.

It was not the best of looks at the bird, but good enough to see the light pink, flamingo-like pigmentation and oddly shaped bill. After observing the bird, I went home and researched the Roseate Spoonbill to learn more about this unusual species.

Roseate Spoonbills can be found in marshy habitats from South America, along the coast of Central America, up into the southern United States. In places like the Everglades, Roseate Spoonbills are easily seen and even breed there during the winter months. These birds nest in colonies, often with other long-legged waders, in trees along the edge of marshes.

Although common locally in places like the Everglades, it is difficult to find this species in other areas. Individuals will occasionally travel up the Atlantic Coast as far as southern New Jersey, but seeing a Spoonbill in Connecticut and Maine (where it was also recently recorded as a state record) was unheard of before this summer. 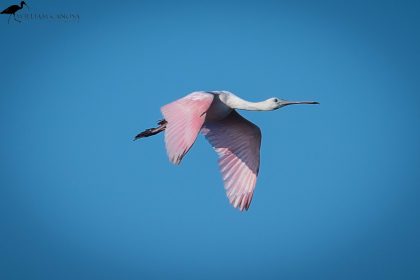 Another shot of the Roseate Spoonbill, taken Wednesday, September 19, by William Canosa.

The National Audubon Climate Report lists these birds as climate threatened but shows that they may be able to shift their range north. If so, this may be the first of many state records for this species!

Like flamingos, Roseate Spoonbills get their pink coloration from the foods they eat. Pigments in the shrimp and other crustaceans that Spoonbills eat transfer to the feathers. To capture food, they sway their heads in shallow water and use their spoonlike bill to feel around for prey.

Its unique bill makes it difficult to confuse the Roseate Spoonbill with any other species. There are other Spoonbill species in the world but none in North America. The bill is long and curved at the tip like a spoon. Most of their body is a roseate, or pink, color, with the shoulder feathers having a darker hue. You may notice that their heads are bald and tinted yellow. If you ever come upon a breeding colony in the southern states, you will also hear the distinct grunting calls that are exchanged among adults during the nesting season. 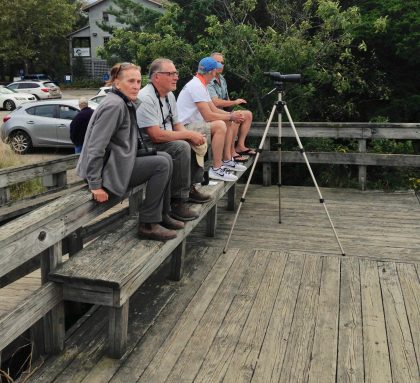 While the Roseate Spoonbill may look unappealing at first glance, it is a truly beautiful and unique bird. Unfortunately their beauty was noticed by feather collectors in the 1800s, when many colonies of waders were destroyed by humans for plume collection. Their populations have come back since this decline, but they are still subject to human disturbance in nesting colonies, habitat degradation, and climate change.

Genevieve Nuttall is the former Osprey Nation Coordinator for the Connecticut Audubon Society.