Roseate Spoonbill again: for your eyes only 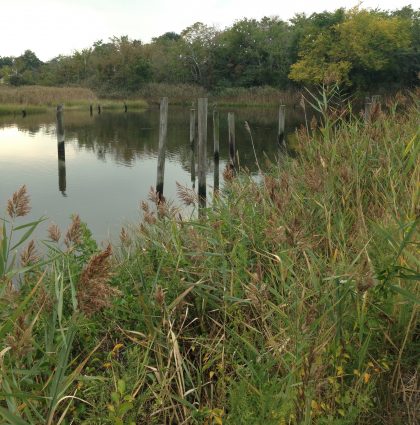 IPhone photo looking across the creek to the spoonbill and egret roost.

Birders go on a stakeout when there’s a report of a rarity. If the bird flies off and is found by someone else, word spreads, like in an episode of Homeland:  “We have eyes on it.”

And if after two or three fruitless searches, someone succeeds in seeing a rarity that everyone else has seen, matter-of-fact acknowledgements arrive – “You got it.” “Glad you got it.”

The object under surveillance has been nabbed, no assets were compromised, no identities blown.

That was me on Monday. I had looked for the Roseate Spoonbill once, late on Saturday, September 22, staking out the marsh at the Milford Point Coastal Center, undercover on the observation platform with two dozen others who came and went, equipped with high-powered optics. The spoonbill, a first for Connecticut, had been seen there for four days. But on that Saturday afternoon into evening, no dice.

I couldn’t make it to Raven Pond in Stratford when it showed up there the next day and on Monday. It disappeared during a couple of days of bad weather and then was found on the sandbar at Milford Point, where it reappeared late each day. Driving east on I 95 in Fairfield County in late afternoon is an activity for masochists or people with a lot of time on their hands. Not me.

But on Monday it was back in Stratford. Patrick Comins, our executive director, texted in the morning: “Spoonbill in Stratford on the Housatonic. On pilings.” By 2 p.m. I had accomplished enough work to take a few hours off, especially since anyone who works for an organization with Audubon in the name can rationalize a rarity-chase as work. I texted Frank Mantlik, a member of our Coastal Center regional board who keeps on top of where the interesting birds are in Connecticut. He responded quickly: “It’s in view now at marina. pull in thru gravel lot to trees on west side over creek.”

I followed his directions and looked for the stakeout. One young man slouched against a car in a parking lot, empty except for boats hauled from the water. He hadn’t seen anyone with binoculars, he said, but there are birds over there, in those trees. 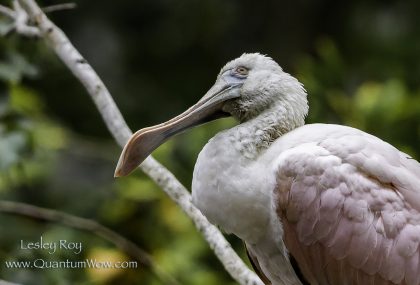 I could see the white shapes of snowy egrets. I walked to where the parking lot met the reeds at the creek edge and scanned the trees, about 200 feet away. I found a bird with what looked like a pinkish wash on its right wing. But its head was tucked into its left side, away from me. I couldn’t tell if the light was making the white of an egret look pinkish. So I kept watching and was rewarded when it untucked its head to preen. There was the spoon-shaped bill, clearly outlined against the leaves for several seconds before the bird tucked it away again. That was it. Check off Roseate Spoonbill on my life list.

I watched it for a while longer, and waited, expecting to hear cars crunching across the gravel. But it was just me, 40 Snowy Egrets, 30 night herons, and the Roseate Spoonbill. I had to let someone know, so I texted Patrick and Frank. They replied right away.

I got it. Mission accomplished. Stakeout over. For my eyes only.