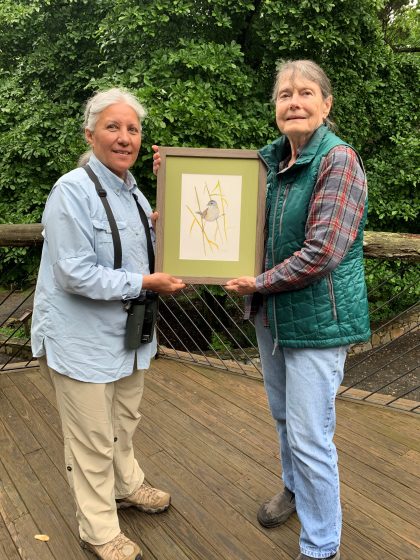 Kathleen Van Der Aue, right, chair of the Connecticut Audubon Board, presents the first place prize for most species seen by an individual birder in 24 hours during the 2019 Birdathon (124) to Tina Green of Westport. The prize is a watercolor of the Sedge Wren that nested in Pomfret last year, painted and donated by Mark Szantyr.

June 4, 2019 – Almost 700 people participated in Migration Madness weekend (May 17-19)! They helped raise $30,000 for conservation in Connecticut, more than triple the amount raised last year during our first Migration Madness.

79 people participated in the Birdathon and saw more than 200 species. Individual winners and totals are below.

We send our sincere thanks. Here’s the list of Birdathon winners …

Most Social Media Posts (from May 1 through May 19).
Juliannie Cerda, Colchester, 14 Instagram posts.
Prize: Framed Patrick Lynch print of an Osprey 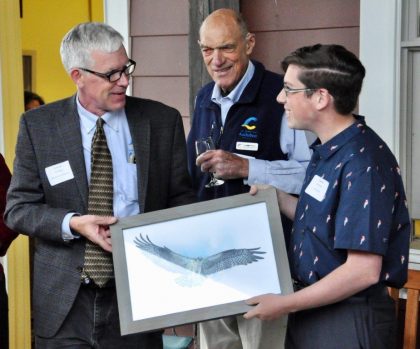 Executive Director Patrick Comins, left, presents Aaron Bourque with his award for submitting the most bird identification photos taken during the 2019 Migration Madness Birdathon. Board member Ben Williams looks on. Fellow Board member and artist Patrick Lynch donated the painting of the Osprey.

Most Species Seen by a New Team in 24 hours
Infinity Birding, 56 species. Prize: A day of birding with Milan Bull

Most Money Raised by a Team
Hope 4 Good Weather, $1,075. Prize: A day of birding with Patrick Comins

We are happy to announce that Paul Fusco, first-rate photographer and designer of our Connecticut State of the Birds report, judged this photo competition!