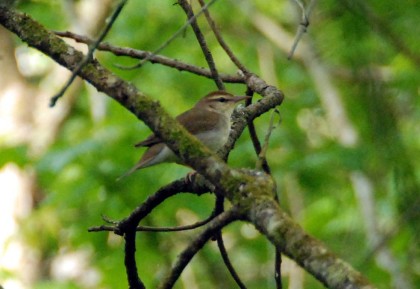 May 13, 2020 — The discovery of a Townsend’s Warbler in Hartford last month — a record first for Connecticut — got birders thinking about which new species might show up next.

Because it’s migration time, thoughts turn to Swainson’s Warbler. Note that the violet color that indicates a sighting is absent from Connecticut on this eBird map.

That doesn’t mean it’s never been here, only that nobody has knowingly seen it. And because of its habit of walking on the ground in thickets, and its loud song, chances are it will be heard before it’s seen. Andy Griswold, our EcoTravel director, explains below. We originally published this in April 2015.

By the way, if a Swainson’s is found in Connecticut, we’ll let you know if you’ve signed up for our Rare Bird Alert.

by Andy Griswold
What it looks like: Swainson’s Warbler, one of those “little brown jobs,” has been seen in the states around Connecticut but never here. As with the Prothonotary Warbler that has been visiting our Larsen Sanctuary in Fairfield, there is the possibility of an overshoot when birds move back to their breeding grounds, which reach as far north as Virginia.

Plain buff-brown with a washed out rufous crown, and a proportionately massive, straight bill, this bird should be in the back of every Connecticut birders mind during spring migration. Field marks include a weak white supercilium (eye stripe) and dark eye line.

Where to find it: Within its normal range in the south, Swainson’s Warbler is found in canebrakes and rhododendron thickets. A good place to look for this bird in Connecticut would be in areas where rhododendron, azalea, and mountain laurel occur with damp, shadowed understory covered with leaf litter.

Note the thick bill on the Swainson’s Warbler. Photo by Andy Jones/Carolinabirds.org

How to find it: This extremely secretive bird should be looked for while it walks (rarely hopping) on the ground where it forages for insects and spiders by flipping leaves. It is likely that you will hear this bird before you see it, its song a series of slurred notes not unlike that of a Louisiana Waterthrush for which the song has been mistaken. My personal pneumonic is “sit seew se tsissy seew,” loud and ringing. See if that works for you. Learn the song and get listening!

It’s likely of course that you won’t find one. But in this habitat and at this time of year look for other warbler species including Ovenbird, Hooded Warbler, Canada Warbler, Wilson’s Warbler, and more. Any bird walking on the ground should be given a second look.

Conservation status: Because this species is so specific concerning its habitat requirements, it is hard to accurately assess population numbers. The bird is certainly at-risk for habitat loss. It is a watch list species whose numbers are not likely large by any sense.The IUCN however lists it as being of least concern.