Diary of a teenage birder from Connecticut, circa 1910. Part 2 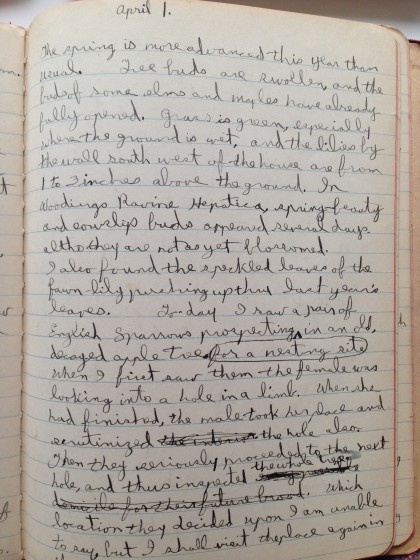 In 1910, 15-year-old Harold Jones was free to wander around the Lapham estate and nearby countryside in New Canaan, making notes on the birds he saw and heard, and on other natural history observations. Thanks to a gift from his family, the Connecticut Audubon Society now has his diaries and notebooks covering several years.

April 2. Saturday. To-day (10 A.M.) I found the first Hepatica of the season, in Woodings Ravine. It was fully out and no doubt opened yesterday. Last year I found my first hepatica about April 5 …

April 5
I observed 14 species to-day, to say nothing of Crows, as Corvus is a daily bird thruout the year I have ceased to notice him in my bird lists. Of course, I also leave out the English Sparrows, as such gamins are not worthy to be mentioned along with our more refined native birds.

I had the good fortune to witness a Cowbird courtship this morning. The male Cowbird (Bullbird?) took great pains to impress his ladylove with the sincerity of his affections; strutting up and down on the limb, he extended his wings, spread his tail and bowed and courtesied in great fashion, uttering his glassy, squeaky note all the while. After several minutes of this the female flew to another perch, no doubt disgusted at her suitor’s outlandish actions, but the male pursued her and continued his attentions.

I wonder if his suit was successful, or did Miss Molothrus reject him, preferring a free life to that of his harem?

April 6
A few Cowslips and Spring Beauties came out yesterday, and perhaps they were in bloom the day before. I saw four or five Adder’s Tongues this afternoon, fully out [our note: Adder’s Tongue is another name for Trout Lily, or Erythronium americanum; in another entry in his diary, Harold called it Fawn Lily].

Hepaticas are abundant now on the slopes of Woodings Ravine. Some of the Swamp Maples (Acer rubrum) have already cast their flowers and will now, no doubt, devote their time, to putting forth leaves. A notable woodland feature at present is the spice-bush, whose tiny yellow flowers do much to enliven the bare and leafless woods. These blossoms, to-gether with the red inflorescence of the Swamp Maples, form practically the only woodland colors to be seen.