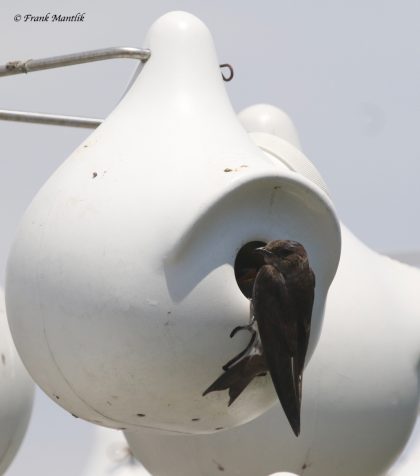 He then writes a report that goes out to the two dozen people who have sponsored a gourd.

On Thursday, July 30, I was joined by staffers Stefan Martin and Kat Gillis, volunteers (and fellow Board members) Lori Romick, George Amato, Gilles Carter, and intern Liam Hourihan to conduct our eleventh nest check of the season of the Milford Coastal Center’s Purple Martin colony.

It was a typical summer day: sunny, hot, 86F, humid (53%), with a warm SSW breeze at 10 mph. While prepping for the survey, we counted about 20 adult Purple Martins actively bringing food to their chicks. Several of the remaining chicks were peering out of the nest holes. Undoubtedly more chicks have fledged since last week.

Conducting the survey, many nests that had chicks were now empty [you can read an earlier report of Frank’s, from mid-July, when the nests were more active]. Many Martin youngsters have fledged. In fact, while we worked, three more took their first flights! Wings, don’t fail me now! The one that flew from #57 was caught and returned to a healthier nest in #60. Unfortunately, we found single dead chicks in three different gourds; cause of death unknown.

Of the 71 total gourds, only 8 still have chicks. The two remaining eggs have not hatched and are deemed unviable. About three gourds still had an issue with some mites, and we wiped the excess.

Gourd # 38 with the nest-cam is now empty, with those chicks having fledged as of 7/24. Our very efficient crew completed the work in just 30 minutes, minimizing disturbance.