Semipalmated Sandpiper: From tundra to Suriname and back via Milford Point. 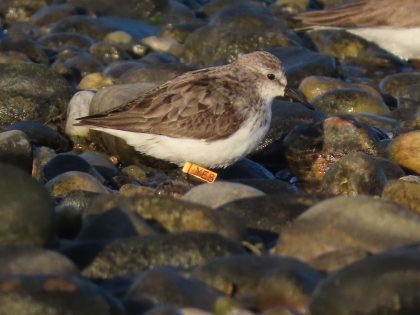 The yellow flag on the bird’s leg says YE8. Photo by Patrick Comins.

August 27, 2020 — No matter how much you know or learn about bird migration, it is still a marvel that a shorebird resting on the sandbar at the Milford Point Coastal Center had once been on the flats of Suriname, on the northeast coast of South America.

That’s 2,700 miles. And to make it more amazing, the bird at Milford Point was banded in Suriname almost four years ago.

The story is, the other day Patrick Comins, Connecticut Audubon’s executive director, was monitoring shorebirds Milford Point and photographed a Semipalmated Sandpiper.

On its leg, as you can see in the photo, was a flag — an alternative to more typical leg bands — with the marking “YE8.” Patrick emailed the photo to David Mizrahi, New Jersey Audubon’s vice president of research and monitoring in Cape May, N.J. New Jersey Audubon is a sponsor of bandedbirds.org, a database of bird sightings, and also studies and bands New Jersey’s migratory shorebirds.

Patrick wrote, “I found the attached Semipalmated Sandpiper at Milford Point the other day, yellow flag YE8. I reported to BBL [the federal bird banding data repository], but haven’t heard back. I am forwarding to you since I know you band Semis and thought it might be one of your birds.”

David responded: “This is one of our birds. It was banded in Suriname at our Warappakreek study site (5.990477°, -54.915384°) on 12/12/16.  … Interestingly, this same flag color/code combination was reported from the Newburyport-Merrimack River, MA this past May. These two sightings together are really great data!!”

Of course the migration from Suriname to the New England beaches is only part of it. Semipalmated Sandpipers nest along the coast of Hudson Bay and along the north slope of Alaska, which adds at least another thousand miles to the journey.  Even more remarkably, these small birds, weighing about an ounce make their flights nonstop from Alaska to Hudson Bay, then to New England and then again to Suriname.

All of this highlights the importance of what we’ve been saying for much of this summer: Connecticut’s beaches are absolutely critical for migrating shorebirds. Without places like Milford Point to feed and rest there is no way these birds would be able to make the long flight directly to South America.

Connecticut Audubon has been working with the Audubon Alliance for Coastal Waterbirds to promote this idea, with support from the Long Island Sound Futures Fund. We’re about to put up new educational signs at Milford Point, Stratford Point, and Sandy Point in West Haven. The signs ask people to give the sandpipers and plovers plenty of room, especially at high tide when the beach and sandbars are at their narrowest. Here’s what it says: 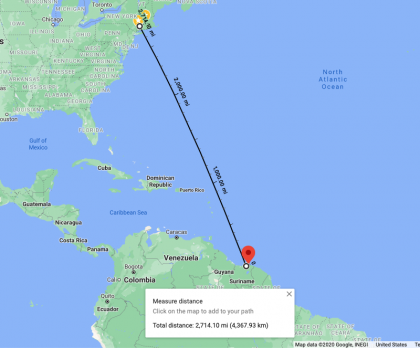 When the tide is low, sandpipers and other birds that use the beaches spread out and have plenty of places to eat and rest.

But when the tide is high, the beach is it: they have no place else to go.

Connecticut’s beaches are globally-important stopovers for Semipalmated Sandpipers, and provide Sanderlings, Least Sandpipers, plovers, and many other shorebirds a place to rest and refuel. From here they often fly non-stop to as far as South America in the fall and the Arctic in the spring.

If they can’t rest here and eat enough to fuel themselves for migration, they might not survive.

If you walk too close, they’ll scatter and they won’t get enough rest or food.

So please, give the sandpipers and plovers plenty of room.

The summer shorebird project also included last week’s Zoom presentation with Brad Winn, director of shorebird habitat management at the Menomet Center on Cape Cod. That presentation is available on our website.

It’s important to give shorebirds plenty of room but that doesn’t mean you should head to the beach to enjoy them. Connecticut Audubon’s Coastal Center at Milford Point and Roger Tory Peterson Estuary Center are both offering shorebird walks (and RTPEC has another Zoom program scheduled) designed to give you great views of the diversity and abundance at a distance that’s safe for the birds.