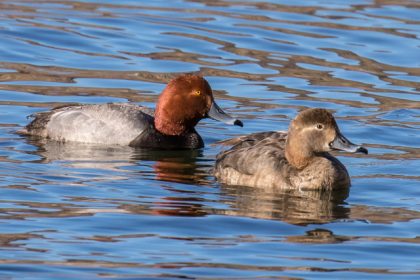 December 15, 2020 — Before we get to the Daily Birds, are you interested in the “Young, Gifted, and Wild About Birds” Zoom series that starts this week?

Click here for details and to buy tickets. Proceeds go to support our bird conservation work.

by Chris Wood
Two red-headed ducks occur in Connecticut in winter, one somewhat regularly, the other not so much. Both are diving or bay ducks – or pochards – of the genus Aythya.

This genus also includes the far more common Greater and Lesser Scaup and the Ring-necked Duck.

In Connecticut, all of these ducks are found most reliably along the coast, but any of them may be seen along major waterways and in large bodies of water inland.

The Connecticut shore marks the approximate northern limit of the winter range of the Canvasback and Redhead.

The Canvasback (A. valisineria) is the largest of the Aythyas and although it is usually more often found than Redheads in Connecticut in the winter, it is actually one of the least abundant North American ducks.

Redheads (A. americana), about the size of a Lesser Scaup, are found every year in our state, but usually only as individuals and in company of scaup or Ring-necked Ducks. Most Redhead sightings are from the western coast of Long Island Sound, although this may partly reflect more intense coverage of that area by Connecticut birders. The Grass Island Natural Area in Greenwich is a reliable spot. 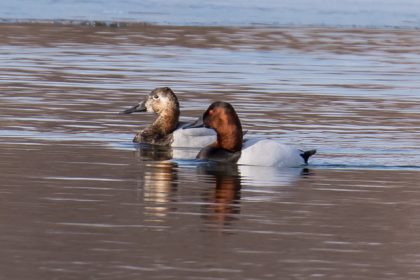 At primary winter staging areas along the Gulf Coast of Texas and Mexico, hundreds of thousands of Redheads gather in winter to feed on rhizomes of shoalgrass. Considering how pretty this duck is, that must be some fantastic sight.

Redhead are, noticeably, closely related to the Canvasback, and in fact are partly responsible for the Canvasback’s lower population — Redheads commonly parasitize Canvasbacks by laying eggs in the latter’s nests. Like Redheads, “Cans” winter all across the United States, depending on the severity of the winter, including along the Atlantic coast.

ID Tips: Close-up, Canvasback and Redhead are easily separated. Canvasbacks have bright white backs and a pronounced triangular face with a long sloping bill. Redheads are darker backed, with a rounded head and smaller bill.

At a distance in poor light the head and bill shape are the best distinguishing field marks (see photos). Lone female Redheads may be difficult to identify at a distance among rafts of Ring-necks and scaup but, closer up, females of both of the latter species show a distinctive facial pattern of white feathers around the base of the bill not evident in Redheads.

Canvasback and Redhead reports are most often from protected bays in western coastal areas. Greenwich, Norwalk, Black Rock, and New Haven Harbors are all potential spots. Larger open bodies of water inland are also worth checking.

Canvasback may also be found at these locations, but a reliable site for this species is Frash Pond in Stratford, near the Sikorsky Airport, as long as the water is open.

Conservation Status: As with most “pothole” nesting ducks, protection of wetlands across the Midwest prairies is critical for sustaining populations of Canvasbacks and Redheads. Although still widely hunted, bag limits and other controls have reduced hunting mortality and both species’ populations are above the goals set by the North American Waterfowl Management Plan, according to BNA Online. Apparently, Redheads are exceptionally gullible to decoys and are known as the “fool duck” in some areas.

Duck hunting with scopes and cameras is always an enjoyable winter birding adventure and seeing one of these lovely waterfowl appear in your lens is always a highlight.

Chris Wood, a Southbury resident, has been birding for more than 40 years. He is a contributor to The Connecticut Warbler (the journal of the Connecticut Ornithological Association) and blogs about birds at Wood Warbling.