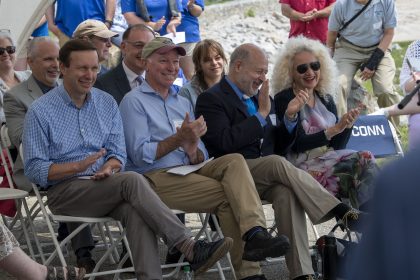 May 23, 2022 — Three decades of collaborative work culminated on Saturday, May 21, in an official celebration in Groton of Connecticut’s new National Estuarine Research Reserve.

The reserve encompasses 52,000 acres of the lower Connecticut River and the Connecticut waters of Long Island Sound east almost to the Rhode Island border. With the Sound sparkling in the bright sunshine, government officials and dozens of well-wishers gathered at the University of Connecticut’s Avery Point campus on Saturday to mark the official designation.

Among those at the celebration were U. S. Senator Chris Murphy; U.S. Representative Joe Courtney; Richard Spinrad, the administrator of the National Oceanic and Atmospheric Administration (NOAA); and UConn interim President Radenka Maric. Commissioner Katie Dykes represented the Connecticut Department of Energy and Environmental Protection.

NOAA oversees the National Estuarine Reserve system. The DEEP, UConn, and Connecticut Sea Grant will be the primary state partners.

Both were at the celebration, along with Connecticut Audubon Board Chair Kathleen Van Der Aue; Claudia Weicker, Nell Twining, and Barbara Kamicker, members of the RTPEC regional board; and RTPEC Director Alisha Milardo.

Connecticut Audubon has worked closely with the Pew Charitable Trust’s Conserving Marine Life in the U.S. project to build public support for the reserve. Tom Wheatley, Pew’s senior manager for the project, joined the Connecticut Audubon delegation at Avery Point. 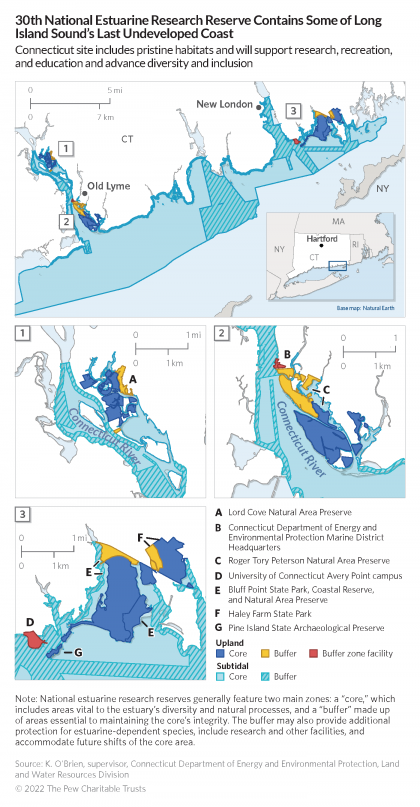 The purpose of the reserve is to provide a focus to keep the estuary ecologically healthy; to serve as a site for research to aid conservation; to provide information to local officials and others who make decisions affecting the area; and to provide outdoor education for students.

Read about the official designation in January here.

View maps of the Reserve here.

As much as $1 million a year will be earmarked for the reserve, to be used by scientists engaged in researching issues such as climate resiliency, water quality, habitat quality, and fish and wildlife.

The reserve will also be a source of funding, materials, and field trip locations for local education programs such as Connecticut Audubon’s Science in Nature, which has reached more than 75,000 school children in Connecticut and has thrived particularly in Old Lyme and New London, the heart of the estuarine reserve area.

The project has been in the works for three decades. The National Estuarine Research Reserve System, established by Congress in the early 1970s, is a network of sensitive coastal areas across more than 1.3 million acres in 24 states and Puerto Rico. Connecticut’s reserve is the 30th in the nation.