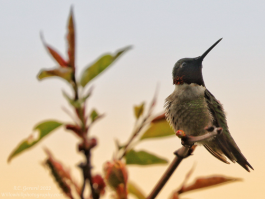 June 2, 2022 — One thing is clear: the judges of the Migration Madness Birdathon Photo Contests admire a good hummingbird photograph.

For the second year in a row, a Ruby-throated Hummingbird is our first-place winner in the adult birder category; in 2020, a hummingbird photo won third-place.

This year’s winning photo was taken by Robert Gerard, of Madison, on Friday, May 13, at the Stewart B. McKinney National Fish and Wildlife Refuge in Westbrook.

“I was walking on a trail through a brushy area and the hummingbird flew out in front of me, then quickly zipped away,” he said. “Later as I returned to the area the hummingbird appeared again and perched for about 20 seconds on a branch and I was able to capture this photo.”

First place in the Young Birder category goes to 11-year-old Pavana Attonito of Darien, for her shot of a Piping Plover at Milford Point.

Her mother, Mekhala Attonito, told us: “Pavana is especially excited that her Piping Plover won because she has been volunteering with me at Milford Point once a month to monitor the beach nesting birds, and has really loved watching these birds. She took a lot of photographs of them that day (from afar of course)! Last year I had to teach her how to work the camera, but this year she just took off with it on her own for a couple hours, which was really nice to see.”

To be eligible, photographers had to register for the Birdathon, take their photos during the Birdathon weekend (May 13-15), and submit original unaltered images.

More than 100 photos were entered in the contest. We sent them without identifying who took them to photographer Jackson Hallberg, a Mystic native who served as this year’s judge. Connecticut Audubon staff members and their families were not eligible.

Here are the winners. Each image is accompanied by Jackson Hallberg’s thoughts on the photo.

Congratulations to the winners! And our sincere thank you to all the 2022 Migration Madness Birdathon participants.

Special thanks to this year’s photo contest judge Jackson Hallberg, a photographer and designer based in New York and Los Angeles. Raised in Mystic, Connecticut, Jackson is a photography graduate of the Rhode Island School of Design (2015), where he received the Harry Koorejian Memorial Scholarship and was curated into the Senior New Contemporaries exhibition. His installations have been shown in New York, Paris, and Los Angeles. For the past two years, he has been researching and photographing the population of white-tailed deer on Fire Island, New York, as part of an ongoing project.

Take a look back at previous Migration Madness Photo Contests: