April 19, 2019 – There are so many birds to find in April, we thought we’d post a quick compilation of a handful to be alert for over the next few days. 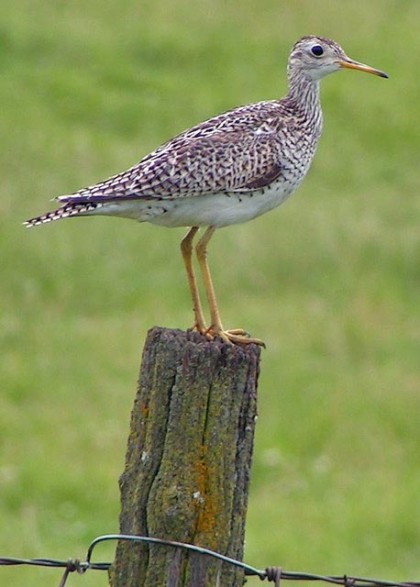 Palm Warbler, by Nick Bonomo (originally published April 2016)
“This species’ spring passage through Connecticut to its Canadian breeding ground peaks during the second half of April, and numbers quickly drop once the calendar turns to May.”

Louisiana and Northern Waterthrush, by Greg Hanisek (originally published May 2018)
“These warblers are active, vociferous birds, habitual tail-waggers easily told from our array of other warbler species. Telling them apart is another matter.”

Great Egret, by Genevieve Nuttall (originally published April 2018)
“In Connecticut, it is easy to find a Great Egret enjoying the food sources offered in marshes, wetlands, and other aquatic systems. Most coastal wetlands are reliable sites for these birds all summer.”

Brown Thrasher, by Connecticut Audubon Board Chair Kathleen Van Der Aue (originally published April 2016)
“Its song consists of an assortment of sounds usually given in pairs (compare with the catbird’s single repetition and the mockingbird’s several repetitions of each phrase). It can be loud and lengthy. Listen carefully and you might hear bits of other birdsong.”

Upland Sandpiper, by Paul Cianfaglione (originally published April 2017)
“The best time to locate an Upland Sandpiper in Connecticut is when the species is en route to its northerly breeding grounds in April. In migration, any open expanse along the Connecticut River, such as agricultural land and sod farms, are ideal stopover sites.”