Connecticut Audubon’s Birds of the Year for 2019

December 16, 2019 – Let’s start this discussion of Connecticut Audubon’s 2019 Birds of the Year with a sad truth: there are no large, pink, subtropical species on the list.

The Roseate Spoonbill – with its garish color, its accommodating photo availability, its fanboys and fangirls (and we were definitely among them) – was so 2018.

This year’s list has nothing quite so spectacular, although it does have a state first-record, as the spoonbill was.

But the 2019 list has great birds nonetheless, and we can’t help noticing as we type that they have great names. Grebe and plover. Jaeger. Avocet. Owl, sparrow and crane.

This year’s list includes nine birds. It’s a year-end reminder of how much fun birding can be. Which is not to suggest that it is nothing but fun. As conservationists, maybe we should have chosen as “Birds of the Year” the 2.9 billion birds that have vanished since 1970, as the Cornell Laboratory of Ornithology and others reported a few months ago.

But we can work on that issue and have fun at the same time, which is what our Birds of the Year list is supposed to be. Here it is, in chronological order:

Barred Owl
We began getting reports of unusual sightings of Barred Owls early last winter, but we knew something truly interesting was happening when Jim Arrigoni, one of our staff conservation biologists, snapped a photo of one in Middletown. On his backyard bird feeder. During the day.

Barred Owls appeared near Long Island Sound, alongside highways, in fields – scores of sightings, many by people who normally pay little attention to birds.

The hypothesis was that these were mainly hungry young birds out looking for mice, voles, and other small prey following a season in which the state’s rodent population was low. Unfortunately many were hit by cars as they flew, and a number of owls were found weakened or injured and brought to rehabilitators. We’re hoping Connecticut Barred Owls fare better this winter.

Sandhill Crane
Participants in our 2019 Migration Madness Birdathon, in mid-May, found over 200 species over the weekend. One of them was a Yellow Rail, a real rarity in Connecticut. It was heard — but not seen — in Old Saybrook. Our choice for this list though is the Sandhill Crane. Sightings seem to be more and more common in Connecticut, and some people suspect Sandhills might be breeding in the far northwest part of the state. During the Migration Madness Birdathon, Tina Green, Charlie Stebbins, and Connecticut Audubon Executive Director Patrick Comins saw one in Norfolk.

Piping Plover
Fifty-seven pairs of federally-threatened Piping Plovers nested on Connecticut’s beaches in 2019. They produced 98 young birds – a rate of 1.72 fledglings per nest. It marked the 14th time since 1996 that the rate topped 1.5. That success rate is important because, if sustained over time and a wide enough area, it’s high enough to result in an increase in the number of Piping Plovers.

Far from being accidental, it was the result of the hard work of about 100 volunteers and more than 20 staff of the Audubon Alliance for Coastal Waterbirds, and the leadership of the Connecticut Department of Energy and Environmental Protection.

American Avocet
It wasn’t the first species to go out on our CTAudubon Rare Bird Alert but American Avocet – three individuals hanging out together in the shoals – was the RBA’s first big success. Timing and location were a big part of it. The birds showed up at the Milford Point Coastal Center on a beautiful warm weekend in late August and stayed for seven days.

Easily 100 people saw them. Most important of course was the birds themselves – their beautiful plumage and easy-to-see stature, and their amazing recurved bills. The sandbar was alive with the sound of digital cameras whirring. There’s a link to opt in to our RBA here.

Parasitic Jaeger
The eBird map for the past five years is dotted with occasional sightings of ocean-going Parasitic Jaegers in Connecticut – 2015, 2016, 2018. It’s unlikely though that any of those birds had an audience as big as that on the evening of September 1. It was an EcoTravel Swallow Spectacular cruise near Haddam, on the Connecticut River. EcoTravel Director Andy Griswold and staffer Matt Bell were on board.

Matt explains: “About 150 people were on the boat. I spotted the bird from the top deck as we were barely off the dock, sprinted down to Andy on the second floor and got him to announce it over the mic. There was a pretty big commotion as we worked to get everyone on the boat onto the bird. It was pretty crazy.”

Eared Grebe
Venture out west, from the Great Plains to the Pacific Ocean, and you have a good chance of seeing an Eared Grebe. But “the most abundant grebe in the world” rarely shows up in Connecticut’s waters. When it did this year, on October 13 at the Milford Point Coastal Center, the hot-shot birders participating in the Big Sit (a fundraising effort to see as many species as possible from one location) were there to record it.

Brewer’s Sparrow
LeConte’s Sparrow
First came the report on the morning on November 23: LeConte’s Sparrow, not unheard of in Connecticut but rare enough to chase. We sent out a text from our CTAudubon Rare Bird Alert, which we started in August. Birders packed their gear and drove to Preston to see the LeConte’s.

Two hours later, we were texting again: Brewer’s Sparrow at Hammonasset Beach State Park. If you were in Preston and you got word of the Brewer’s, you packed up again and drove to Hammo: it was the first time a Brewer’s Sparrow had ever been recorded in Connecticut.

Bicknell’s Thrush
Unless you hear it singing, one of the hardest birds to identify is the Bicknell’s Thrush. That wasn’t a problem for us though. This rarity, which nests in high altitude spruce forests and is globally-vulnerable to extinction, basically identified itself.

On October 9, a Bicknell’s Thrush migrated past our Deer Pond Farm, in Sherman, where our Motus antenna picked up a ping from the bird’s Motus tag. We subsequently learned that it nested near Kibby Mountain, in Maine, and was part of a study of the species’ breeding success in logging areas, conducted by University of Maine professor Amber Roth.

It’s nested on Kibby Mountain for two years and we’re looking forward to hearing that it has returned again. 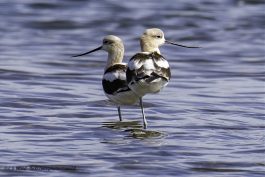 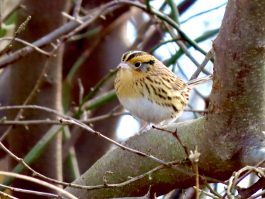 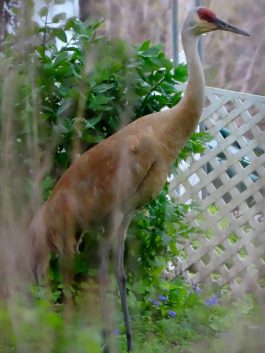 Patrick Comins photographed this Sandhill Crane in Norfolk, during the 2019 Birdathon. 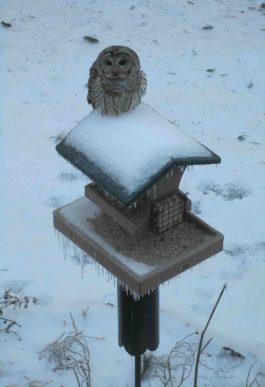 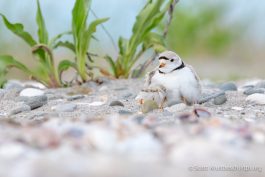 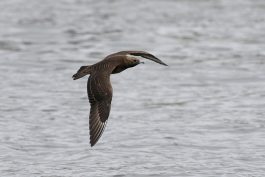 Nick Bonomo snapped this photo of the Parasitic Jaeger not long after the bird thrilled 150 people on an EcoTravel Swallow Spectacular cruise. 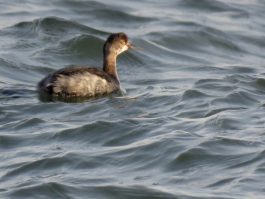 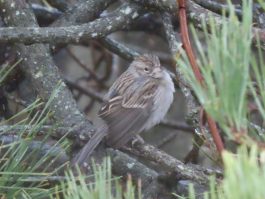 Brewer’s Sparrow, a first for Connecticut. Photo by Patrick Comins.