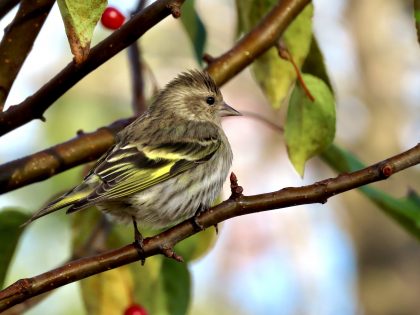 November 17, 2020 — The Connecticut Young Birders Club is a small but active group trying to grow and become more active. One of the members, Will Schenck, wrote this account of a trip they took to Litchfield County on a recent weekend. Their enthusiasm is hard to match. When was the last time, for example, you heard about a “euphoric experience with a Ruffed Grouse”?

by Will Schenck
Nicolas Main, Preston Lust and I headed up to one of the highest and northwesternmost birding spots in Connecticut, Mount Riga in Salisbury, to search for northern specialties, as this winter is proving to be one of the best in decades for finches and other irruptive birds. We were amazed at what we found.

Finches were indeed extremely abundant. Pine Siskins were the most numerous species, with a few flocks numbering over 30. Over 100 were observed in the course of the day. Many (15+) Common Redpolls were interspersed in these flocks; one stand of birches along Mount Washington Road was especially productive, and flyovers were relatively frequent.

However, the clear finch highlight must have been the double-digit numbers (~18) of Red Crossbills we encountered on the mountain. Our first finch of the day was a flyover flock of 7 at South Pond; one other large flock followed, with scattered small numbers later. We were not able to see any of these birds perched (there are few large pine stands that we could see), but they afforded great flight views.

The non-finch highlight was a euphoric experience with a Ruffed Grouse, a rarely seen northern specialty, feeding in the road in front of the car. Other notables included a very small number of Evening Grosbeaks, high numbers of Fox Sparrow, and one Rusty Blackbird flyover. There was a possible encounter with flyover White-winged Crossbill that sadly went unresolved.

I really must personally urge birders to get out to the northern (and especially northwestern) parts of the state, which are desperately under-birded, but during this winter, are sure to hold many truly exceptional experiences, beyond our own extravaganza. 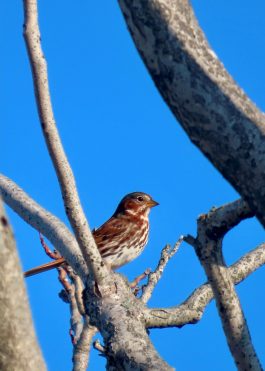 Reports of Pine Grosbeaks are starting to trickle in, and Bohemian Waxwing and White-winged Crossbill are already in Massachusetts.

Who wouldn’t want to get the glory of finding a cooperative flock of White-winged Crossbills eating grit along a pine forest road, or an apple tree covered in Pine Grosbeaks? Or…. and with these birds present as rarities in Massachusetts, it’s not all pipedream fantasy … a Boreal Chickadee? First state record Canada Jay? Fellow Connecticut birders: go north! There are birds!

Note: Will, Nic and Preston returned to that area a few days ago and found five White-winged Crossbills.