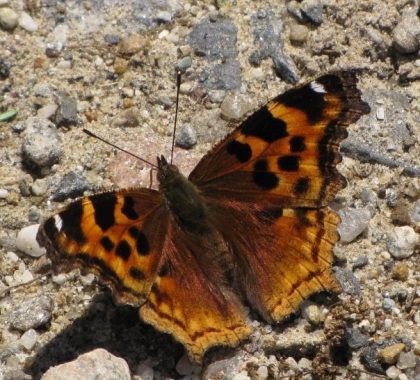 August 2, 2020 — Stefan Martin, one of Connecticut Audubon’s top-notch naturalists, was checking the perimeter of Deer Pond Farm in Sherman last week — the preserve is 845 acres, so checking the perimeter is a big task in and of itself, even when it’s not 85 degrees and humid, as it was that day  — when he saw a butterfly rise from the dirt road.

“It was ‘puddling’ on minerals and I did not know what it was at first until I got binoculars on it,” Stefan said. “At that point, I had the eureka moment!”

It was a Compton Tortoiseshell, a rarity for Connecticut.

“I was able to snap some pictures after it flew into the brush along the side of the road. It was a ‘lifer’ for me so I was very excited to have found it here.”

The Butterflies and Moths of North America Project declares it to be “demonstrably secure globally, though it may be quite rare in parts of its range, especially at the periphery” — like in Connecticut, for example.

That status — rare here but more common elsewhere — is similar to that of the West Virginia white butterfly that Jim Dugan found at Connecticut Audubon’s Croft Preserve, in Goshen, in May.

And it’s fairly standard when a state first-record bird appears, like the Townsend’s Warbler in Hartford in April or the Roseate Spoonbill that spent a few weeks near the mouth of the Housatonic River in 2018. — Tom Andersen